The Magic of a Snow Day in the South

Snow day. When I was a kid, those words were like music to my ears. I didn’t hear them often growing up near the southern coast of Virginia. We didn’t have snow boots or snow pants or even a sled. When it snowed, we just put on tights under our jeans and played outside until our skin stung. I’d peel off wet layers to reveal cold, red legs that could only be warmed by pj’s and blankets and playing Barbies on my shag carpet.

When I was really little, I wore my Snoopy rubber rain boots in the snow, the ones that said “Good” on the left foot and “Grief” on the right, except I could never remember whether it was “Good Grief” or “Grief Good.” I wasn’t a Snoopy fan really. The snow was pretty deep one year and when I ran, those rubber boots stayed in the snow and my stocking feet came out. I guess I grew into those boots before I grew out of them. Later I’d just wear tennis shoes in the snow and I never remember the snow being higher than the laces most years anyway. 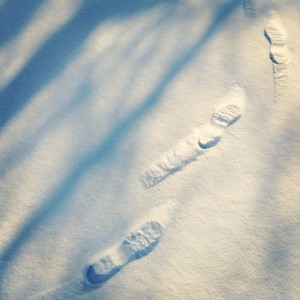 There’s nothing like making those first footprints in the snow.

We didn’t have hills to sled down. When we made a snowman, the trail the ball made exposed the grass in the yard. I always hated that. If it had snowed enough to even cover the grass, it seemed like a pretty good snow. It was something. A dusting was a disappointment. It could be all you got until next year and that was a long time to wait.

It wasn’t until I was in college that I saw a lot of snow. In the mountains, we got feet of snow and I loved it. There were hills for sledding. And trash bags and cafeteria trays made the perfect vehicles for getting down those hills fast. Sidewalks became ice slicks and the only way down was to crouch down low and slide or lie on your belly like a penguin and laugh because who knew getting from there to here could be so much fun?

As a parent now, snow day sometimes means other things, like dread. And that’s a shame. It’s a shame I sometimes, for a moment, forget about the magic of snow. I want my kids to have the same fun I did. In the South we don’t get snow very often. We certainly don’t get a good snow every year. It’s a gift. So we miss a few days of school. (OK, so we miss a few days of school for an inch or two of snow.) But there is nothing better on a cold gray day than watching snowflakes fall, hearing the excitement in your kids’ voices, and knowing you actually can go out in the snow and play with them.

Today they are waiting to play in the accumulation we got yesterday that barely covers the grass. “Will we be able to sled?” We’ll sure try.

Yeah, I hate the cleanup. I hate the slushy puddles on the floor when we come in. But I love that I can get my work done and run upstairs and play a game with my kids or snuggle and watch a movie while we thaw. My husband has an hour to play in the snow before he has to brave snowy Southern roads and go into work. We’ll sled. We’ll throw snowballs. We don’t get this chance every year. And even if it disrupts grown-up life for a little while, we have to remember to get out there and be kids again. That’s part of the magic too. 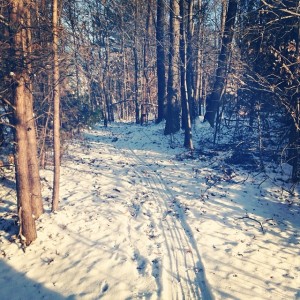