Sometimes the body just knows. It turns out my son’s did. For nine years. When he was a toddler I gave him peanut butter and he smeared it on his face. He got a rash and I waited another year to try again. He wasn’t so interested in peanut butter after that. In fact, for the next nine years, he thought it was stinky and waved his hand in front of his nose and pretended to gag when he smelled it.

He didn’t care for granola bars, the kind with dried fruit and nuts, but he tried them and nothing ever happened. He didn’t like peanut M&Ms, but he ate the chocolate and left the peanut. He ate everything he wanted. Some things touched a peanut, like those M&Ms. Some things included nuts, like pesto. Some things were nuts, like pistachios.

But one day recently, he wanted Pad Thai, a dish that traditionally includes peanuts. I was hesitant. All those years of not wanting peanuts I knew probably meant something. I had thought about getting him tested, but he had eaten so many things in his lifetime. Was I being overanxious as usual? Was I ready for this moment?

“It has peanuts in it, you know,” I warned him.

He looked at the dish and deemed it satisfactory. I put a little on his plate. I almost told him no, to eat something else, but I didn’t. Remember all he’s eaten? I kept an eye on him as he ate it. One bite, two.

Instead of relief, I felt jumpier. I couldn’t eat. I kept watching him. It didn’t feel right. There. He was doing something funny with his mouth, like he had taffy over every tooth and he couldn’t get it off.

“What are you doing with your mouth? What’s wrong?” I asked.

“My mouth feels numb,” he said.

He coughed a little. He got the hiccups. I stood there, choked, wondering, “Do I call 9-1-1 now? Is this just the start of a severe reaction?” But I kept it together on the outside. I kept asking questions and watching him. He drank water. I did what I always do and referred to Google. He appeared to be having a mild reaction and Benadryl would help.

He seemed to be getting better, except for the hiccups. He had heartburn. The numbness was wearing off. I called the doctor’s office, which was closed because it was a Saturday. The nurse told me the same thing I had read online. By then my son was outside, running in the yard. I could breathe. He could breathe. I knew we were lucky.

At an appointment last week, my son’s peanut and tree nut allergy was confirmed. After nine years of avoiding peanuts, he suddenly also has to avoid things he has always comfortably eaten: almond extract, pesto, Honey Nut Cheerios, pistachios, and many other things.

Why he chose to eat that dish on that day, I’ll never know. But I’m thankful it played out like it did, in our home with a quick and happy ending. I’m thankful it wasn’t worse. If he ever has another reaction, it could be.

Pieces of a puzzle have begun to fall into place. I checked our pantry, scanned ingredients lists. Granola bars and cookies he’s never liked revealed the words: contains peanut ingredients, peanut flour, may contain peanuts. I could never understand why he didn’t like these treats. In fact, he’d often tell me they tasted like peanuts when I couldn’t see or taste anything.

All this time, he knew. 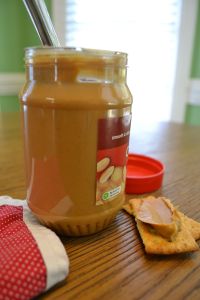