I Admit It: Sometimes I’m Wrong

My daughter has a finicky palate, downright picky if you want to know the truth. Oh, she covers all the food groups, but each meal sits in plain, depressing piles on her plate. In my gut I know things will eventually be all right. I also know our battles are just that, battles.

Left free to graze in the open spaces of someone else’s pantry, she’s a bit less stubborn. I’ve stolen glances from the corner of my eye as she nibbled a hard-boiled egg at a Brownie troop meeting. “Are they eating hard-boiled eggs?” I asked another mom in bewilderment. I swore my eyes deceived me. Another time she held sushi to her lips while I waited for pigs with wings to burst into the room and buzz around our heads.

If you ask my opinion about my daughter’s menu selections, I will often tell you, “She won’t eat that” because I know she’ll scrunch up her nose, supersize her frown, and turn her head in disgust like a disapproving toddler. But I’ll tell you to try her anyway, just in case. Sometimes, though rarely, I’m flabbergasted when my daughter eats a plateful of rice at a friend’s house just because she wanted to have dinner there.

Sometimes I only think I know my kids.

I’ve dreaded soccer games because I didn’t want to see my kid skipping and hopping all over the field only to be surprised with a goal. I’ve skimmed math homework and felt my stomach sink with the weight of a concrete pill only to have my daughter’s mental math work five times more quickly than my own. I’ve taken chances on clothes for my kids that I didn’t think they’d wear once I cut the tags off. Now I can’t get those same clothes off them long enough for a spin in the wash.

Sometimes it feels good to be wrong.

My son wanted to try out for Elementary Battle of the Books this year. The team reads twelve assigned books and then competes in a Jeopardy-like competition against other schools. When he expressed his interest, I was doubtful and, to be honest, not very supportive. He likes to pick his own fantasy-based books. Some of the books on this list deal with real-life issues, not wizards and hobbits. Some of the main characters are girls for Pete’s sake. And he struggles with reading comprehension. Against the group of kids competing for a team spot, I wasn’t sure he could do it.

Book after book, my son fussed and complained. He didn’t like it. It was boring after the first chapter. “Give it time,” I said. “You have to get into the story.” The next thing I knew, he couldn’t put the book down and he proclaimed it the best book ever, even some with girls as the stars.

My son talked about quitting, but after reading five books he had dedicated so much time. He couldn’t walk away. He wanted to see whether he made the team. I was proud of him for making the effort. I saw such transformation: He went from a boy who would only read fantasy to a boy who could appreciate a good story, who no longer judged a book by its cover.

He made the team.

Just when I think I know my kids, they prove how much they change and grow every day. So being wrong sometimes feels like a victory. And it feels good to admit it. 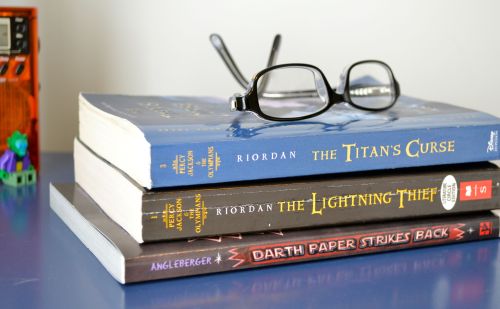 Some of my son’s summer reading selections. Will a battle of the books change that?

35 responses to “I Admit It: Sometimes I’m Wrong”