Urging My Kids Not to Fear Failure

My kids fear failure. I’m baffled as to where this phobia came from. Perfectionism is not a trait I possess. My kids see me fail miserably all the time, but I trudge on. I try, try again or let the flop be the outcome. It is what it is.

I make a new recipe and end up scraping the burned contents off the pan. I constantly scramble around my kitchen in a frenzy due to some bombed dinner, but we still eat something.

I attempt a craft with the kids that totally flops—stamps made out of wooden blocks and puffy paint that are too lumpy to make a legible print. “Well that stinks,” I manage as I clean up the mess.

Homemade stamps made out of puffy paint are actually not FUN!

I try to instill this wisdom in my kids, but they’re not buying it. They want immediate satisfaction. I gently push them to try to do their best, to just give it a go even. I’m the least competitive person I know, but sure I want my kids to know their potential. Am I putting pressure on them that I’m not aware of?

Honestly, I hate to see my kid mosey over to the soccer ball like a limp rag doll with all the spunk of a blade of grass. I’m not asking for a goal. I’m not asking for my kid to be the best player. I’d just really prefer that my child not look lifeless.

But I also haven’t mastered that art of parental encouragement. How do other parents get their kids to perform? Is saying, “Try to kick the ball” or “Run” too much? I don’t feel like it’s overbearing.

I find it’s often hard just getting my kids to the “try” stage. My daughter never wants to draw because she thinks the outcome will look terrible. I tell her to practice. How else will she get better?

I tell my kids that everyone fails before they do a good job at something. You never start out at something doing an awesome job at it. It takes time and practice…and failure. That’s not good enough for them.

I constantly set examples. I offered to bring dessert to a friend’s house for dinner: blueberry hand pies. I’ve made them before and they tasted great. I couldn’t believe I made them. When I made them for my friends, one of the pies burst in the oven and the blueberry juice leaked all over the pan, soaking the bottoms of all the pies. These are good friends, so I packed up the pies, took them to their house, and said, “I’m not sure about the pies.” After I tasted them first, I said, “They don’t taste very good.” Everyone politely ate a soggy pie anyway. 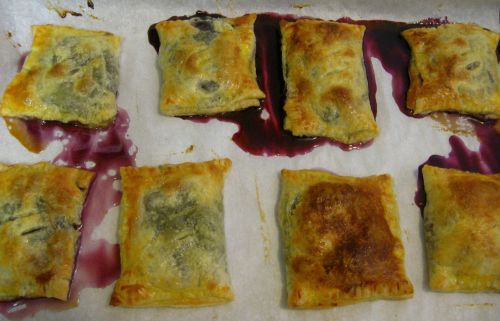 A cooking flop you will only see here, oh, and in my kitchen. Had we eaten these at this very moment, they would have been delicious. I just know it.

My son told me at home later they were gross.

I’m just not afraid to fail. I can accept I’m not the best at something, but if it’s important to me, I keep trying until it turns out OK. Maybe my kids are learning from my failures and they don’t want to be a part of it. Maybe they can’t bear the disappointment of soggy desserts and crafts that don’t work.

Of course I must admit one area where I can’t accept failure: parenthood. And I can tell you that I’ve never tried so hard in my life.

Filed under About Mom

35 responses to “Urging My Kids Not to Fear Failure”