Somewhat Strange and Tasty Collections I Didn’t Know We Had

My son collects things. He accumulates armies of knobby creatures that he makes scream and knock each other down. He’s obsessed with Legos. If he gets one set, he wants the entire line to complete his collection. He collects erasers. Just the plain ones that sit on top of a pencil. He lines them up, makes patterns with them, battles them, who knows. During his Cars the movie era, I can’t tell you how many times we patrolled the toy aisle searching for the elusive Tex Dinoco.

Now he collects names. Names of Harry Potter characters he reads that he scrawls in third-grade penmanship on lined paper, two columns, three pages front and back, and still going strong. Names of multihued tropical fish he reads about, likes, and dreams of one day owning as pets. Names of planets and their moons. Names of baseball teams and football players.

I have long wondered whether his quirky obsessions are normal, what it means for his future, and where on earth it came from. I can be a bit of a pack rat. My husband is a borderline box hoarder. But for years I’ve had no clues as to where his collecting insanity came from.

Then, as I tried to tame my overgrown pile of torn-out recipes the other day, it hit me like a swarm of cookbooks.

It’s no secret to anyone who knows me that I like food. And I particularly like the challenge of finding a recipe to match whatever food I’ve recently inhaled and become infatuated with. Consequently, I’m a bit of a recipe hog. One could say I collect recipes.

Want to see my collection?

This vintage box holds my prized recipes that I use almost every day.

These are recipes I want to try.

This doesn't begin to show my stack of recipes. Man, there's some good stuff in there. 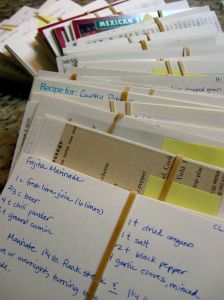 Hmm. Forgot about these.

And I still need to go through these magazines to tear out the recipes I want to try because I know I will…or won’t…but just in case.

I’ve been clipping recipes since around ninth grade. While my friends flipped through Seventeen and YM taking quizzes about kissing and fashion, I pored over Good Housekeeping and Martha Stewart, learning about cake frosting and chicken potpies. It certainly explains a lot about my awkward teen dating years.

Before kids, I used to try three or four new recipes a week. My husband and I like variety, tiring of the same old casseroles and quinoa salad week after week. Then came two kids who like my cooking but not adventure. They prefer comfort foods, the same old thing every week. But it’s OK. It seems there’s plenty in my collection for everyone. Just don’t ask me where anything is.

Filed under About Mom, Boy Stories