On our way home from dinner and a bookstore Saturday evening, from the back of the car came a shaky voice. “Mommy, did you get my purse?”

My husband swung the car around and we headed back to the bookstore where we’d just spent nearly an hour going back and forth from one part of the children’s section to the other. I knew where my daughter set it down, but I didn’t know how long it had been missing.

I began making mental notes of the purse, sure that someone had seen it lying on the floor and taken off with it. It doesn’t look like a child’s purse and I was afraid a dishonest person would think it was chockfull of valuables. And it is, to a six-year-old. I worried too because I knew she brought money to buy something, but I didn’t know how much. It could have been a quarter; it could have been all of the loot from her piggy bank. 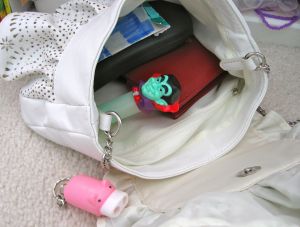 You never know when a pig flashlight will come in handy.

Fully ready to fill out a missing purse report, I had a visual in mind. Description: ruffled, white, with silver chain. Contents: an old black flip phone that she pulled out at dinner, red wallet with a pink poodle on the front. What else does a busy six-year-old need? Oh yes, a comb, a nail file, a tub of lip gloss, a pig flashlight, a Dracula Pez dispenser, and Harry Potter glasses. One never knows when one needs to appear studious.

I prepared myself to run into the store, ready to deal with tears when the purse turned up missing, snatch the purse from the hands of a stranger compelled to play finders keepers, or go on with my report. But my husband jerked the car in park and jumped out before I could unbuckle my seatbelt. Minutes later, he and my daughter emerged with the purse and a smile. Crisis and tears averted. The money, the pig flashlight, the Harry Potter glasses, all of it still stuffed safely within.

In the car, my daughter’s forgotten purse brought back a memory that replayed like a favorite Brady Bunch rerun in my mind. Countless times as a kid when my family had eaten in a restaurant, often while on a trip, my sister would announce somewhere along the road that she’d forgotten her purse. My father would utter a few words under his breath and turn our old Granada back toward the greasy spoon where we’d just enjoyed a leg stretch and a family meal. We’d all trudge in and find, tucked in the corner of the booth or on the bathroom counter, her purse, sitting safely and untouched. It became so frequent, sometimes happening several times on the same trip, that I began to ask her before we left any restaurant if she had her purse. I suppose we’ll begin asking our daughter the same thing.

It’s funny when your kids’ childhoods spark a small memory from your own. Though not a grand incident, my daughter’s forgotten purse helped me remember a small piece of my past. On the way home Saturday night I thought of those memories, those purses, and I bent down to check for my own purse, just to make sure.

10 responses to “Forgotten Purses and Memories”